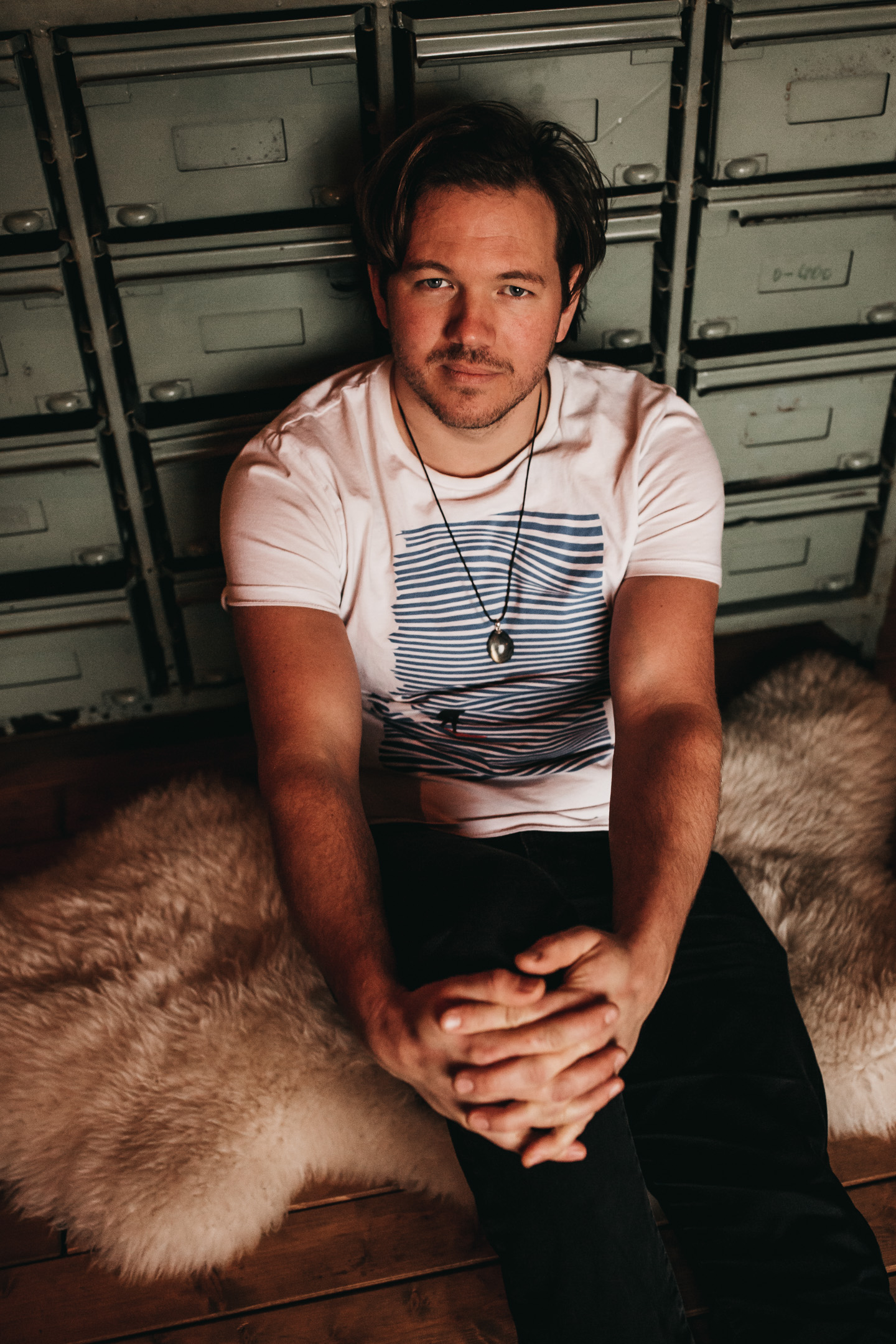 What makes a man a man? Bas Beenackers tries to answer that question on Man, his first solo EP. The singer, guitarist and songwriter of the Utrecht-based indie rock band My Blue Van felt that the time was ripe to explore more personal territory. Accompanying himself on acoustic guitar, he bares his soul in five pensive, understated songs. “This is who I am.”
For those who know Bas Beenackers (1985) from his electrifying live shows with My Blue Van, the sound of Man will take some getting used to.
No howling distorted guitar, funky drums or raucous screaming vocals. None of that. His first solo EP features intimate, acoustic songs, bare and vulnerable.
Man was recorded in three days at producer Simon Akkermans’ Epic Rainbow Unicorn Studio (Binkbeats, Bombay, Gallowstreet) in Rotterdam.
The cover features a blue-orange linocut of a little man. Beenackers made it as a nine-year-old elementary school boy in Maarheeze, Brabant.

The titles of all five songs are a single word, beginning with Reason, a hauntingly beautiful love song that beads like a tear just fallen.
“You got my head all confused, like no one could you lit the fuse. Before I explode I ask you, what made you walk out on me?” In the next song, Repent, Beenackers offers penance in a warm-blooded, melancholy voice that brings Radiohead’s Thom Yorke to mind.
Man’s third song is a well-chosen cover.
Polly, written by the tormented singer-songwriter Gene Clark, is as sad as a question without words, to paraphrase writer Carson McCullers. “When I first heard that country song, it echoed in my head for days,” says Beenackers. “One day I played it for my wife. She loved it too and asked me to record it. I think Polly fits perfectly with this collection of songs.”
Beenackers has never sounded more personal than in Child. Like an aging father, he reflects on life and proclaims his unconditional love to his sons. “All I do is for you child, please do realize (…) My days are behind me, but my love is like glue. Keeps me holding on to the world, life, you.” Man closes with the hypnotic Cherry, played on a twelve-string guitar, with Beenackers pushing the limits of his vocal chords.

So what makes a man a man? Daring to be yourself. Not worrying about what others think or pretending to be other than you are, with all your flaws and imperfections. On Man, Bas Beenackers serves up the naked truth – honest, sincere, unadorned.
This takes nerve and faith in your own ability. And aren’t those precisely the characteristics that make a man a man? “Hmmm… Sure, that and a pair of testicles”, as The Dude said in The Big Lebowski.

Bas Beenackers is part of our distribution + platform. If you are interested in our services please get in touch.